Charles 3X Alexander
​Community Outreach Director
Charles 3X Alexander is the Director of Outreach for I Am My Brothers’ Keeper. He was born and raised in the city of San Diego, California and is most proud of his amazing two children, Osiris and Chariah Alexander; he considers them his greatest gift and contribution to this world. Because of the many years of involvement with community organizations such as the Compassion Project, Black Men United, Together We Build and in Co-Founding Overcoming Gangs it has made his expertise and insight invaluable to the IAMBK Team. He is responsible for several initiatives such as; “Every Day is Mother’s Day,” mentoring and tutoring in our local elementary schools and a weekly Free Food Program that is responsible for feeding families in our community just to name a few.

His leadership has been instrumental in improving our community in stopping the unwanted issuance of a liquor license in a neighborhood already heavily saturated with Alcohol Outlets. His many years of petitioning City Hall officials to bring resources and Summer Food Programs to the Mt. Hope Community finally paid off in the summer of 2013.

His hard work has resulted in being awarded the Urban League’s 40 under 40, an award given to young leaders who are playing critical roles within San Diego County. He has also been featured in two local documentaries; MTV Flipped and Collaboration with the Students of Rancho Bernardo High School, which consequently won first place and afforded the students college admission to film school.

​He has just recently completed his own documentary “One Hundred Reasons Why Black Women Should Accept the Black Man’s Apology,” as well as authored best-selling children’s book entitled “We Are Our Ancestor’s Keeper." 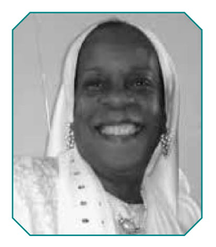 Sister Mary Muhammad
Chief Administrative Officer
Sister Mary Muhammad is the Chief Administrative Officer for I Am My Brother’s Keeper. She has nearly forty years of administrative, supervisory, and/or management level experience, and served as Chief Financial Officer for a nonprofit organization for many years, and has a broad skill base in the areas of business writing; human resources; financial, organizational, and time management; executive support; as well as a passion for community relations and inter-organizational and diplomatic affairs. Sister Mary is firmly committed to the effective administration of programs and services, utilizing appropriate tools and resources that improve the individual, and thereby enhance the community.

​She is the mother of four, grandmother of nine, and has been married forty years this December to her husband Bernard.